Within a Perimeter Block, create buildings at the edges. Build some of them using Small Plots, with fine-grained features at the streetscapes. Generate a Place Network creating layers and articulations of space along the frontages. 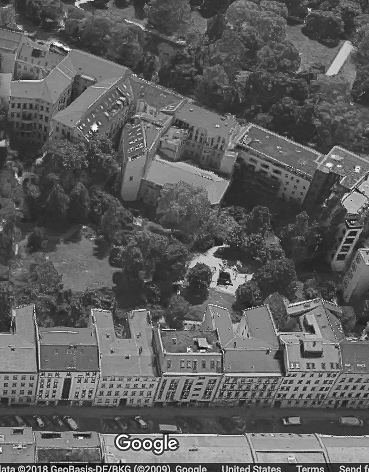 Problem-statement: Along the edges of perimeter blocks, the buildings have to meet particular requirements. At the street, they need to form attractive, active edges. On the back sides, the buildings can be much more irregular, but still need to provide light and open space. In both cases they must include zones to form transitional layers from public to private.

Discussion: On the front side, the buildings need not abut the pavement or sidewalk directly, but can step back into small front yard areas (see Place Network, 6.1). They can also shift back and forth slightly, creating different articulated zones of outdoor space. They can also step back with terraces at upper levels, or include balconies and other outdoor spaces, creating more interest and variety.

On the rear side, perimeter buildings can take on a much more discontinuous form, as they do in the image at the front of this pattern. They may include accessory buildings, garages, alleys, parking areas, utility areas, private gardens and outdoor spaces, semi-private spaces, allotment gardens, and many more kinds of spaces — but they must do so as part of a coherent and legible pattern of public to private pathways.

Perimeter buildings can also be used to provide blocks-of-blocks — that is, smaller perimeter buildings within the larger block that in turn enclose smaller spaces such as courtyards, gardens and so on. Such a structure can be seen at the upper left of the photo at the beginning of this pattern.² 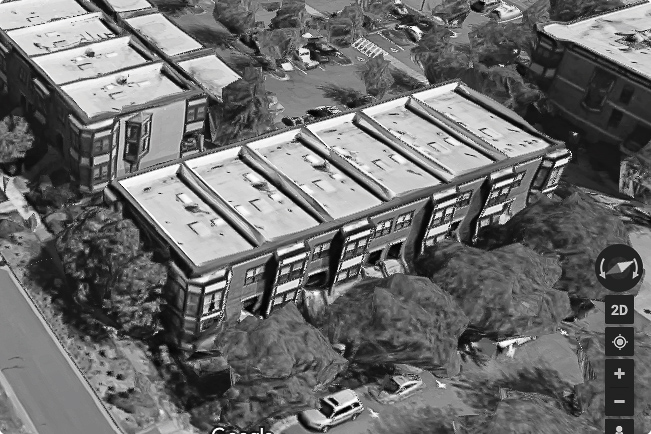 The rowhouses of Orenco Station in Oregon form perimeter buildings, with 12 foot (3.7 m) outdoor terraces as well as small 4 foot (1.2 m) yards forming a double layer of semi-private front space along the streetscape.

Create perimeter buildings that abut the streets surrounding each block, with almost continuous building frontage to the maximum extent possible. Create variety in the building form with step-backs and setbacks, and layers of semi-private space. On the back sides, lay out the buildings with ells, courtyards, outbuildings, and other discontinuous forms. 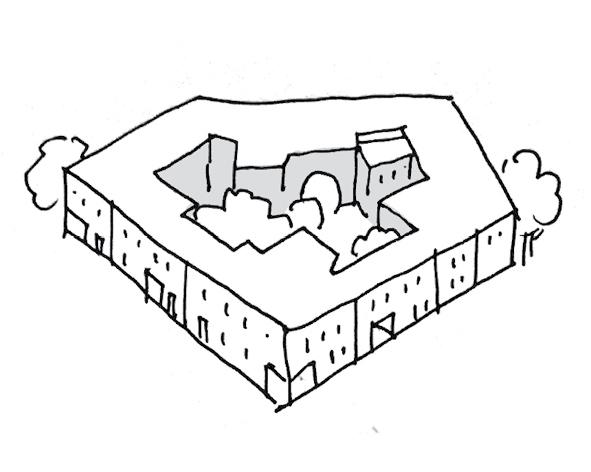 Provide Human-Scale Detail, and use Complex Materials along the frontages of the buildings. …

² This urban pattern, and related ones, may seem “old-fashioned,” but they actually represent the tip of the iceberg of very recent innovative scientific research. Looking at urban form as a system evolving over time to adapt to human use and changing forces, we can see that the morphology reaches a highly organized and complex state. After centuries of adaptation, building clusters acquire “emergent” properties that were not designed at the beginning. We connect to those geometrical qualities viscerally, and often pay a great deal of money to visit them in places where they can still be found. The trick now is how to accelerate the evolution of urban form, from centuries in physical space, to days in virtual space, so that we can build immediately with a comparable embodied complexity. This is what such patterns represent: “urbanism as computation” giving specific geometrical results. Morphological urban patterns take us away from monotonous and simplistic repetition, but also from random building footprints that come out of a narrow technological response, or a single artist’s expression = both of which are likely to be poorly adapted to human need.