Discussion: It is crucial for each unit of governance to see itself as embedded within a larger cooperative system which is partly formal, and partly informal. The business of governance of public spaces is thus a matter of continuously negotiating agreements, identifying and resolving problems, working through conflicts (including with other units of governance) and promoting the best interest of the public realm as much as is possible within the constraints of the moment. This is the nature of “polycentric governance.”

The idea of polycentric governance was developed most thoroughly by the political economist Eleanor Ostrom1, who described a series of partly overlapping institutions (including governments, businesses, NGOs and individuals) working within a cooperative structure defined by agreements and basic rules. The concept goes back at least to the work of Michael Polanyi, and, as discussed more recently by Aligicka and Tarko2, is defined as “a social system of many decision centers having limited and autonomous prerogatives and operating under an overarching set of rules”. These rules include formal laws, contractual agreements, and informal or even tacit agreements between the polycentric entities.

It is important therefore to respect and support these multiple levels of governance. Too often, however, centralized institutions (especially governments) suppress polycentric governance networks, often because they are simply more difficult to manage. This tendency must be resisted, in order to tap the superior problem-solving power of self-organizing and distributed networks.

Structure the governance of place in your city, town or neighborhood as a series of many overlapping formal and informal institutions, a system of “polycentric governance.” Various institutions will have formal control over specific defined parts of a structure, but many other institutions will have overlapping and informal controls. Work to cooperate with these various entities from your own position or, very often, multiple positions. 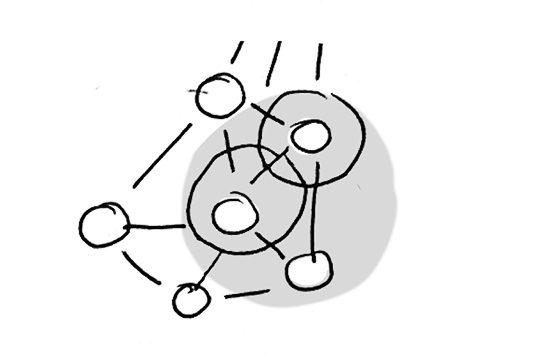 Recognize and support the least structured forms of place governance, including Informal Stewardship. Assure that Public-Private Place Management is balanced, and does not serve the interest of private over public interests.