Within a Polycentric Region, we need to establish a balance between vehicular mobility and pedestrian safety, while maintaining, as much as possible, a continuous connectivity through the urban region. Problem-statement: At a larger urban scale, there is need for higher-speed vehicular mobility. But at a smaller sub-neighborhood scale, there is a need for resident-pedestrians to have a quieter area, free of the dangers and disruptions fast-moving vehicles.

Discussion:: In many cities around the world, there is a surprisingly consistent pattern of through vehicular streets, spaced at roughly 400 meters or ¼ mile, or less. This pattern long predates the automobile, a fact that is not so surprising when we consider that vehicles of various kinds (carts, carriages, etc.) have existed in cities for millennia, and that these vehicles all pose some dangers to pedestrians. It seems that neighborhoods have self-organized to achieve a balance between the needs for pedestrian protection and vehicular mobility, by creating a protective zone (or “sanctuary,” as described by Donald Appleyard) that is roughly equal to an easy walk, or slow drive, to the nearest vehicular street. That distance is about 200 meters, or 400 meters in diameter.¹ 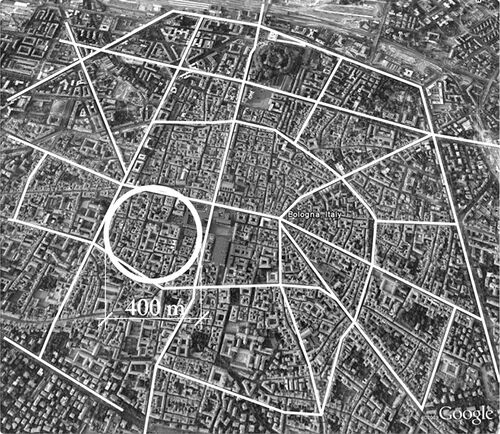 400M Through Street Network
The striking pattern of roughly 400m spacing of principal through avenues and “sanctuaries” in Bologna, Italy.
The same pattern can be seen in many other cities around the world.

It is important to understand that this pattern does not require a regular grid, or standard block sizes, although many cities (especially older cities in the United States) do in fact have the 400-meter pattern within a regular grid, and often with standard-sized blocks. The pattern also does not prohibit some smaller streets from aligning within these 400-meter zones or through their edges. It only requires that these smaller streets do not accommodate fast-moving vehicles, traveling relatively straight for long uninterrupted distances (typically 3 kilometers or 2 miles). 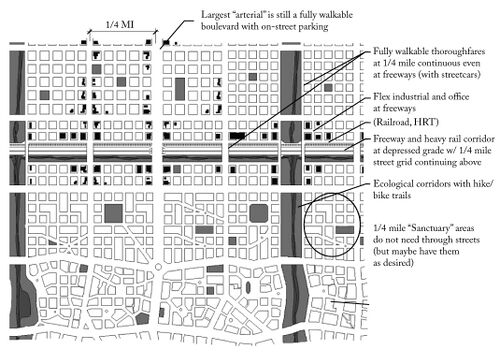 400M Through Street Network
This illustration (not to scale) shows that regular blocks and street grids are not required for the pattern,
and a much more irregular pattern of principal through avenues at 400m (as shown below) is possible.

When laying out street grids, use a rough spacing of 400m (¼ mile) or less for principal through streets. Within these roughly 400m areas or “sanctuaries,” make shorter, interrupted, lane-like streets that accommodate vehicles, but allow pedestrians to dominate. 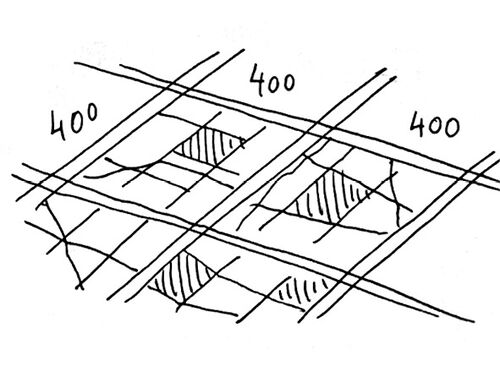 At larger scales, accommodate higher-speed mobility with the Multi-Way Boulevard that combines mobility with safe paths and crossings for pedestrians and bicycles. Where the highest speeds are required, use a Mobility Corridor with grade-separated pedestrian and bicycle paths, and crossings at no more than 400 meters. At smaller scales, use the Avenue and Shared Space Lane patterns…