Discussion: Symmetry is in many ways the most important property in cities, and in living structures too. There are many kinds of symmetries — bilateral (like our two hands), radial (like the irises of our eyes), and so on. There are also many compound symmetries, like our eyes (each of which is radial while both are bilateral).

But breaks in symmetry are also very important, as we are learning from many fields today, notably physics. A relentless form of symmetry — one that does not break when adaptive conditions require it — is oppressive, and usually indicates a faulty process of generation. (Including a designer who has become megalomaniacal with their design, as can be seen in, say, the vast, overly-symmetrical palaces of some despots.)

A more benign form of symmetry can be seen occurring spontaneously in many places — exquisitely symmetrical at local and human scales, but interrupted at larger scales, especially when topography or other conditions prompt an adaptive shift. This “symmetry-breaking” is actually a key generator of a more complex form of order.¹

Three important points are worth explaining. First, symmetries that contribute to perceiving “life” in the environment exist mostly on the smaller and intermediate scales. In the best-loved examples, there are thousands, if not millions, of cooperating smaller-scale symmetries. They all cooperate to generate coherence instead of randomness. The opposite case — where there is an overall symmetry on the largest scale, but no further small-scale symmetries — is perceived as oppressive.

Second, we instinctively compute the coherence and intensity of multiple symmetries in our field of view, and apparently “feed visually” on high degrees of organized complexity. Yet multiple symmetries on façades and perceivable structures have priority over symmetries of the building’s plan. While those are also important, we may not be able to grasp the ground symmetries in a complex building. We normally cannot see the plan when we use the building at ground level.

Third, monotonous repetition abuses the symmetry idea to generate a hostile environment. The human mind cannot identify meaningful information presented in, say, endlessly repeating blocks or windows, and tires itself in trying to grasp a non-existent complexity. This is why groupings and variations are necessary to break a monotonous symmetry, and why they arose as an essential part of traditional design solutions (see Small Groups Of Elements.) 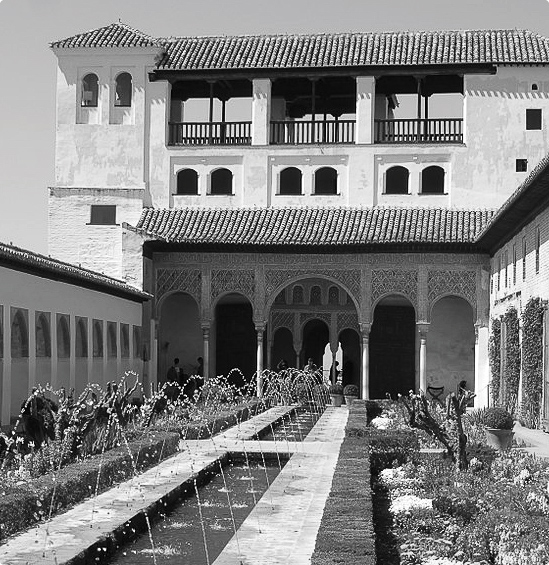 There is a very high degree of symmetry in the Alhambra in Spain, seen above and in the image at the start of this pattern. It includes bilateral, radial and other forms. However, this symmetry exists only at smaller “local” scales. At larger scales the symmetry often breaks, as can be seen in the asymmetrical upper building in this image.

Use symmetry to create beauty at local and human scales, but use it sparingly at larger scales. Break the symmetry as needed to respond to changes in terrain or other environmental conditions. Do not use symmetry slavishly, but as an asset to be applied within a looser, more complex geometric system. 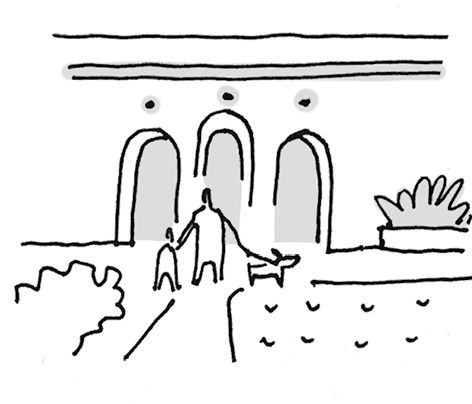 Use local symmetry to create Construction Ornament and Human-Scale Detail. …

¹ The property of local symmetry is discussed at length in Book One (and elsewhere) in Alexander, C. (2003). The Nature of Order: The Art of Building and the Nature of the Universe. Berkeley: Center for Environmental Structure.