Within the Polycentric Region, one of the most important tasks is to improve the urban quality of many suburban areas. 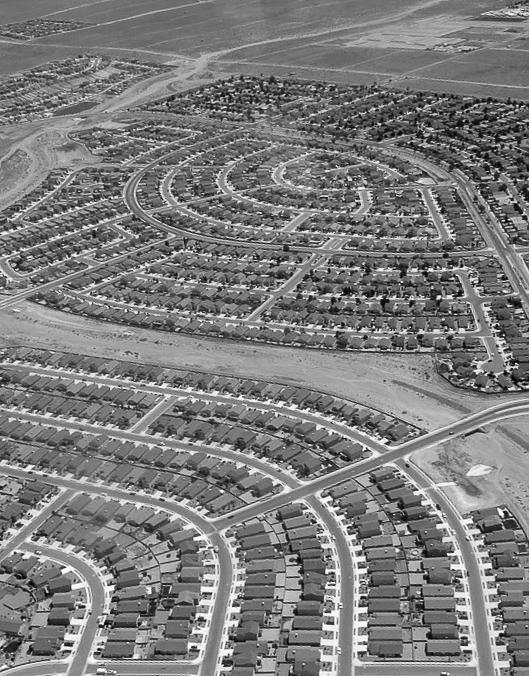 Problem-statement: The existing suburban regions that are low-density, segregated by use and by population, high-consumption, fragmented and dysfunctional, represent one of the greatest land resources for the future. But the challenge of retrofitting and urbanizing these areas is enormous, with many barriers remaining.

Discussion: The sprawling suburbs represent a large and growing percentage of the world’s population, particularly in countries like the USA where auto-dependent suburban development has dominated for decades.

One challenge is that existing owners are resistant to change, and political processes therefore often inhibit urbanization. But there are economic mechanisms to promote urbanization, including developing attractive new urban centers on adjacent empty land such as parking lots and unneeded right of way. Another strategy is to acquire future easements that do not go into effect for the foreseeable future, and that property owners will therefore be more willing to sell or otherwise grant permission.

Another significant barrier is the holdover of zoning codes and laws from a period when sprawling development was seen as more benign than it is now. A key challenge is that sprawling development is still very profitable, even to city bureaucracies in the form of increased fees and tax base. This means it is necessary to find ways to change the “operating system”, especially by changing the economic incentives and disincentives. For example, taxes, fees, system development charges, and other mechanisms can help to make good-quality urbanism more cost-competitive in these suburban locations.

In addition to the legal mechanisms, we must also be clear about the geometry that we wish a sprawling suburb to evolve towards. That geometry is described by other patterns in this book (400M Through Street Network, Public Space System, Walkable Streetscape, Terminated Vista, et al.). We can also describe it as a geometry of organized complexity, of diversity and inhomogeneity, where the urban fabric forms overlapping heterogeneous zones that support mixed activities and uses. The first indicator that newly-implemented legal incentives are working to “fix” the sprawling suburb is a departure from the original homogeneous urban footprint.