To encourage a Walkable Streetscape and ensure the Street As Center, it is necessary to create proper spatial definition. 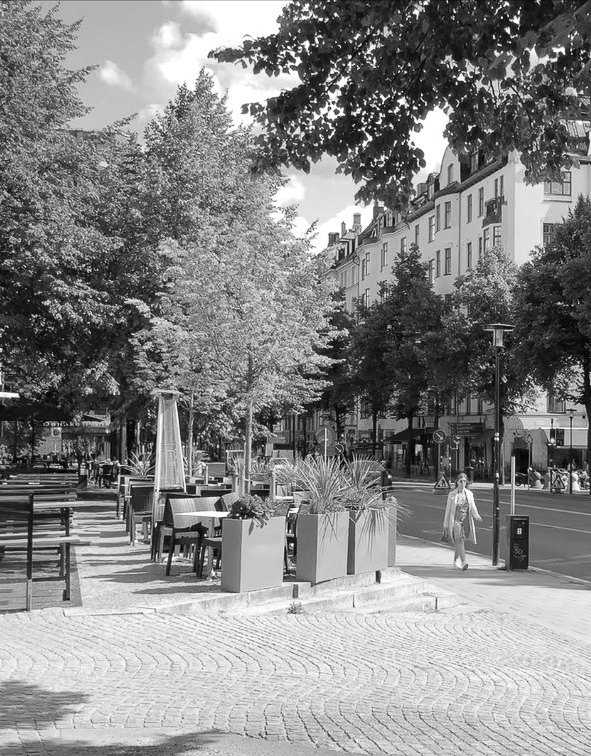 Problem-statement: There is a basic psychological need to feel a sense of spatial definition and enclosure. This need exists for pedestrians on streets — but it is often unmet.

Discussion:: Many authors have commented on the difficulty of creating spatial enclosure along walkable streets, and the importance of creating “street walls” that help to do this. For example, Ewing and Handy (2009)1 discuss this problem:

“In an urban setting, enclosure is formed by lining the street or plaza with unbroken building fronts of roughly equal height. The buildings become the ‘walls’ of the outdoor room, the street and sidewalks become the ‘floor’, and if the buildings are roughly equal height, the sky projects as an invisible ceiling. Buildings lined up that way are often referred to as ‘street walls’. Alexander et al. [Pedestrian Street, APL 100] state that the total width of the street, building-to-building, should not exceed the building heights in order to maintain a comfortable feeling of enclosure. Allan Jacobs [in Great Streets] is more lenient in this regard, suggesting that the proportion of building heights to street width should be at least 1:2. Other designers have recommended proportions as high as 3:2 and as low as 1:6 for a sense of enclosure… The expert panel… opined that the required building height to enclose street space varies with context, specifically, between a big city and small town.”

In Ewing and Handy’s own research using visual surveys of expert panelists, they did not find a significant relationship between a precise width-to-height ratio and perceived sense of enclosure. This finding further suggests that there is no single ideal ratio, but rather, a general rule of thumb that varies by context.

A guideline for street enclosures including street walls, showing what not to do (left) and what to do (right), from the Ohio Department of Transportation (USA), 2018.

When seeking to make a street more attractive to pedestrians, conceive of it as a room, or a series of linked rooms. Assure that there are “walls” in the form of buildings, rows of trees, or other forms of enclosure that are at least half as high as the distance between these walls, but no more than twice as high. Avoid “dead spaces” of large parking lots and other major gaps in the street wall. 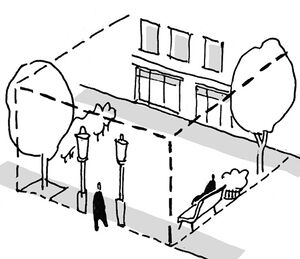 Create a sense of enclosure on the long ends of streets with a Terminated Vista of a building or landmark. Establish a relatively uniform street wall (with some defined jogs, setbacks and step-backs) using a Form-Based Code…